Tickets to Jaipur for Cheap Flights

Rajasthan's beautiful Pink City Jaipur, was the stronghold of a clan of rulers whose three hill forts and series of palaces in the city are important attractions. Known as the Pink City because of the colour of the stone used exclusively in the walled city, Jaipur's bazaars sell embroidered leather shoes, blue pottery, tie and dye scarves and other exotic wares. Western Rajasthan itself forms a convenient circuit, in the heart of the Thar Desert which has shaped its history, lifestyles and architecture. Jaipur has much to offer visitors -everything from pageants and festivals to extraordinarily clad people, a wealth of handicrafts, a royal legacy of palaces, and sightseeing- that will occupy their time.

Settled in the rugged hills of the Aravalis, Jaipur is the pristine jewel in the desert sands of Rajasthan. Jaipur is as remarkable for its marvellous architecture and town planning as it is for the lively spirit of the people who inhabit it. The city presents a unique synthesis of culture that has to be experienced in order to be appreciated.

Jaipur, the capital of Rajasthan is also known as the Pink city because of the pink wash applied to the buildings in this city. Jaipur, a royal city with its glorious fairy-tale palaces, lovely temples and stunning rugged hilltop fortresses display remarkable harmony in architectural splendour. The abode carries a exquisite charm that makes it different from any other destination in the world. The historical monuments that it endorses, narrates the stories of the gallantry of Rajput rulers during the ancient past. Jaipur beams boldest at dusk, when it's well worth walking to Amber and, much like its founder, Jai Singh II, the Pink City is both proud and resilient.

Jaipur is one of the most popular destinations on a tourist's itinerary. The magnificent forts, beautiful havelis and colorful bazaars make Jaipur a popular tourist destination among tourists. It's proximity to Agra, the City of the Taj Mahal, further adds to its appeal. Jaipur is part of the famous Golden Triangle Tourist circuit that includes Delhi and Agra. Places of attraction are the City Palace, Jantar Mantar, Jalmahal, Jaigrah Fort, Amer, Nahargarh Fort Central Museum, Birla Planetarium, Laxmi Narain Temple, Moti Doondri, Kanak Vrindavam, Govindeviji, Isar Lat, and many more.

There's the Elephant Festival in March, Gangaur is celebrated in March/April and Teej celebrations occur in August. Jaipur's craft, especially lacquer bangles are famous all over the world. 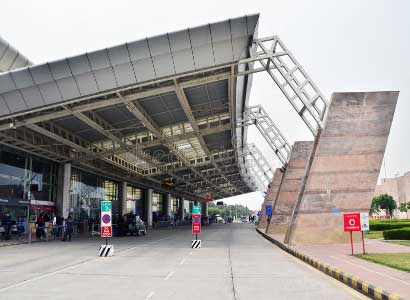 The Jaipur International Airport is the main entry point into Rajasthan.. It is easily accessible by radio taxis from the prepaid taxi counter located just outside the airport. Roughly 15 kilometres from the city. The cultural aura of the city is depicted in murals on the terminal's walls, despite the fact that it is modern. Direct flights connect JAI to Middle Eastern cities such as Dubai, Muscat, and Sharjah. This gives foreign passengers on connecting flights a wide range of options. Also this the Jaipurs best Airport! The staff as well as the ammenties offered for customers is topclass for those wishing to travel to Jaipur. 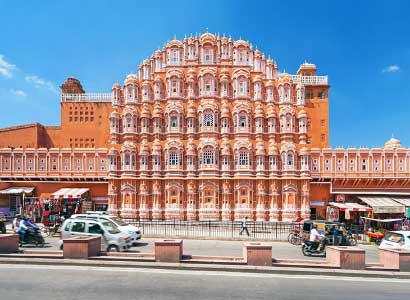 Classic historical attractions such as Nahargarh Fort, Hawa Mahal, Amber Fort, and Jaigarh Fort lead the list of Jaipur attractions. The Jantar Mantar Observatory, a UNESCO World Heritage Site, must be included in every Jaipur travel itinerary. Iswari Minar Swarga Sal, Jal Mahal, and City Palace are among the other iconic sights that travellers purchasing cheap flights to this city choose. The Marble Temple, Jain Mandir, Govind Devji Temple, and Galtaji are all must-sees for religious pilgrims. The Amber Fort Sound and Light Show highlights the modern side of the once-princely kingdom. For shopaholics, the handcrafted goods remain treasured souvenirs. 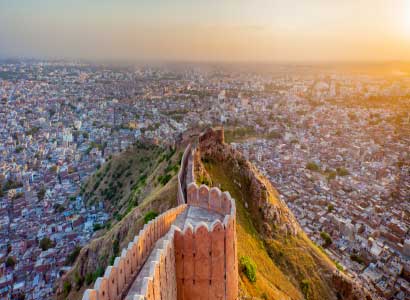 The best times to visit Jaipur are the months of October through March.. The city is bright and sunny in the mornings and delightfully cool at night. Making it the ideal time to go sightseeing and engage in other vacation activities. However, the city's favourable weather conditions result in large crowds and higher costs. So it is important for tourists to book hotels and tickets well in advance. The monsoon months of July and August are particularly good for getting swept up in the city's festive excitement while also enjoying gentle showers amid a happy atmosphere. Also the JLF festival is a great festival for tourists looking to get swept up and away into the culture of Jaipur.